Funk is a genre where the guitarist takes a step back and stops leading the song. He becomes a rhythm player and brings some grooves into the mix.

Playing funk isn’t dependent on the equipment but the technique. It’s easy to learn and tough to master a technique that gives funk songs that distinguished vibe. That being said, some guitars definitely favor the genre.

In this article, I’ll review some of the best amateur guitars for funk.

Although it’s all in the technique, there’s also an expectation of what funk1 should sound like. Funk has a bright, clean tone that cuts through the mix.

The guitars on my list are not only good enough for funk, but they’re also excellent novice guitars.

Stereoshore.com is reader-supported. When you buy through links on our site, we may earn an affiliate commission at no cost to you. As an Amazon Associate, we may also earn from qualifying purchases. Thanks for your support! This particular model is the Fender Player Stratocaster. Fender has many versions of the same model: Player Series, Made in Mexico, American, Custom Shop, and a few others. Although the Player Series is a budget Fender, at the end of the day, a Fender is still a Fender. Yes, this is less expensive than an American Fender — the finishing might not be as polished, and the American pickups might sound better, but this is still a fine guitar.

It’s an affordable way to get a Fender that will last you for as long as you care for it. Entry-level players might lose their interest with a low-cost guitar; although this is a cheap Fender, by no means it is a shabby guitar.

The Stratocaster is great for funk and is the choice of players such as Jimi Hendrix and John Frusciante. This guitar is in a variety of colors and finishes, and you will be impressed.


Where are Fender Player Stratocasters made?

The Fender Player series is manufactured in Mexico. You can find the manufacturing location of every Fender guitar in the back of the headstock.

What color is the pickguard?

The pickguard and the pickups are light cream not 100% white.

Does the maple neck have a gloss or a satin finish?

This guitar’s neck has a satin finish.

Someone looking for a cheap Fender.

Although they are budget Fenders, the Player Series look, sound and feel as good as any other Fender. Squier is Fender’s more accessible brand. Like the parent company, Squier also has a range. From best to worst, it goes as follows: Bullet, Affinity, Standard, Vintage Modified, and Classic Vibe.

The Affinity is a solid series for inexperienced musicians offering an excellent foundation to learn the basics.

The materials and the finishes are low cost. However, those are not necessary when you just want to gain experience.

When it comes to funk playing, the Telecaster might not be ideal; a Stratocaster would do better. Still, for the price, the Squier Affinity Telecaster is a decent guitar.

The Telecaster has a rich, mellow sound that doesn’t translate well into funk.

It’s an excellent buy if you also play styles such as country. As a funk guitar, it is acceptable, but if you’re looking exclusively for a funk guitar, other options should be considered.

Does this guitar have a solid alder wood body?

Does this guitar have a satin or gloss finish on the neck?

This guitar has a satin finish.

What strings does this guitar come with?

Someone looking for a guitar capable of blues and country or who admires the Telecaster look.

The Squier Affinity Telecaster has an excellent quality (both construction and sound wise) for its price. I mentioned the Affinity series, which is good enough for its price. Here, we have the Bullet series. Make no mistake: this is an absolute freshman guitar. It’s good enough for someone who has never held an instrument in his life, and that’s it.

If you’re aware that the construction is below average, the electronics are subpar, and that the finish is poor, then this is a sufficient guitar for what it is. Nonetheless, this guitar is an excellent base for modifications.

Because they’re Stratocasters, they’re great for funk. Since it’s a Squier Bullet, they’re not great at all. If you’re not planning on modifications, don’t want to buy a new guitar in the near future, and have an ample budget, then find something else.

If this guitar is what you can afford, then understand you can learn on it and play funk, but you’ll look for an upgrade in no time.

For an extreme budget, it does its job.

Does this guitar ship with any extras?

No. This is just the guitar with no extras.

What does HSS mean?

HSS refers to the pickups. This guitar has a humbucker (H) on the bridge and two single-coil (S) pickups.

Do you need to set up this guitar, or does it play alright straight out of the box?

Since this is a less expensive guitar (and might get knocked around during delivery), always do a setup. There might be some fret buzz and other playability issues otherwise.

A novice on an extreme budget or someone looking for a modification base.

At this price, you get what you paid for. When mentioning a funk guitar, you don’t necessarily think of a Les Paul. There’s a reason why Les Pauls are unusual in funk: the genre shines with bright and poppy tones, the opposite of a Les Paul tone.

However, plenty of reasons exist to use a Les Paul as a funk guitar. First of all, there’s nobody stopping you. It’s music, not math: rules are meant to be broken. The warm sound of the Epiphone Les Paul can bring something new to the table.

There’s also the versatility question. Are you planning on playing funk exclusively? Chances are you’ll discover something else. If you also enjoy hard rock and the likes, then the Epiphone2 Les Paul is the perfect choice.

Epiphone is to Gibson what Squier is to Fender. The quality and the big brother support are all there — at a budget.

Is there a left-handed version of this guitar?

Yes. Epiphone has left-handed versions of their guitars.

Is this a solid body guitar?

Is this a junior-sized guitar?

No. This is a full-sized guitar.

A Les Paul at a budget; what’s not to love? 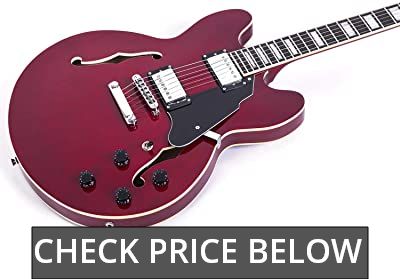 Hollow body guitars3 are a staple of blues and jazz. They produce clean and warm sounds and have been used since the ’30s. They’re adaptable guitars (as Chuck Berry showed us with his rock and roll) and can also be great for funk.

The 2020 Grote semi-hollow is a terrific entry-level hollow body guitar that will suit most amateur musicians. This is a good choice if you love the hollow body aesthetic and it’s sound — although, to be honest, since this is a guitar for rookies, its sound shouldn’t be a concern.

For its price, this guitar sounds awesome. It has a warm tone with a boosted low-end and a decent high-end. It will not sound like a Gibson ES-335 (even if it looks similar), but it is more than acceptable.

Out of the box, it lacks readiness, but that’s typical with online-bought guitars. After a proper setup this guitar feels and plays fine. The electronics are a great base for future modifications.

Can you play this guitar without an amp?

You can play this guitar without an amplifier, but the sound will be muted. This instrument is meant to be played with an amp.

What material is the nut?

The nut is made of bone.

Is there a left-handed version?

Someone looking for a hollow body newbie guitar.

This hollow-body guitar has a nice finish and sounds great. How do you play funk guitar?

Funk guitar is defined by a percussive and often muted rhythmic sound. Chords and melodies are rare, and riffs, when they exist, are simple.

This percussive, rhythmic way of playing might be tricky to get a hang of. It involves a lot of muting with your fretting hand and requires some speed.

The best way of learning how to play funk guitar is by listening to funk and learning the guitar parts of those melodies. Although diverse, many songs feature similar guitar rhythms.

While chords are rare in funk music, chord positions are not. The fingers are placed on the fretboard as if you were playing a chord, but instead of hitting every note at the same time, you only hit one or two.

The 9th and the 13th chord are two popular chord positions in funk music. Yet, as with everything in music, it varies from song to song.

Funk is not about the equipment, but about the groove. You don’t need a special guitar to funk — any guitar is satisfactory if your heart’s in it.

Even so, there’s no shame in having a dedicated funk guitar. That guitar should be bright and clean, and with an easy to play neck. The Fender Player Stratocaster HSS Electric Guitar fits the bill and is the best guitar for that price.

That being said, you won’t go wrong with the guitars in my list. Funk on!